The province of Manitoba recently announced upcoming changes to its Provincial Nominee Program, including a new Express Entry pathway for skilled workers overseas coming into effect in January 2018. The Overseas Skilled Worker program targets applicants with experience in an occupation considered in-demand in the province.

Applicants must also demonstrate an established connection to Manitoba, through either the support of a family member or friend in the province, previous education or employment in the province, or an Invitation received directly from the MPNP as part of Manitoba’s Strategic Recruitment Initiative.

As of January 2018, the Manitoba Overseas Skilled Worker Program will have two pathways, the Manitoba Express Entry Pathway, and the Human Capital Pathway. The basic eligibility requirements are as outlined below: 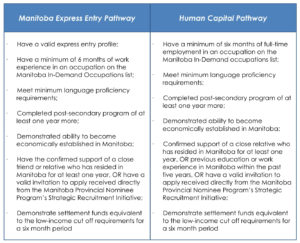