The Atlantic Immigration program was introduced in March 2017, with the intention of attracting skilled workers to the Atlantic provinces in order to promote economic growth in the region. 2000 Applications to the program will be accepted in 2017. The program requires potential employers to become designated by one of the four Atlantic provinces: New Brunswick, Nova Scotia, Prince Edward Island, or Newfoundland and Labrador. Applicants to the program must have a job offer from a designated Atlantic employer, and they job offer must be endorsed by the applicable province. Applicants must also work with the employer and a settlement service provider to create an individualized settlement plan.

Applicants can qualify for the program under three different program streams: the Atlantic Intermediate Skilled-Worker Stream; the Atlantic High-Skilled Worker Stream; or the Atlantic International Graduate Stream. Applicants who meet the eligibility criteria and have an endorsed job offer from a designated employer can apply for Permanent Residence, and in some cases a temporary work permit in order to come to Canada and begin work prior to the approval of their Permanent Residence application. 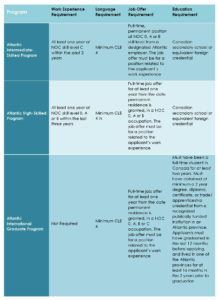